Recipes / Recipe for a “Golden Milk”

Having been diagnosed with Ulcerative Colitis back in 2011, I have learned a thing or two during my food odyssey that help my body in the fight against various symptoms of this nasty autoimmune disease. One of these tricks is a mixture that is referred to as “Golden Milk” on social media – though it’s technically not a “milk” at all – and of which I’d love to share the recipe with you!

Beware though, it’s very different from the curcuma lattes and the sorts that sometimes bear the same name. And it’s a lot less tasty, unfortunately.

Feeling the effects of the Golden Milk

I discovered this version of “Golden Milk” on Instagram two years ago and I started by following the original recipe I found on there. But it should be noted that every person is different and you will have to find out what combination works best for you.

I have been making and drinking my version of this Golden Milk recipe (nearly) every morning for the last year. I can only speak for myself but I have reaped some huge benefits from this mixture.

For one, I was able to travel to countries with hard-to-digest-foods like Peru or Mexico, eating anything I wanted, without experiencing too heavy symptoms from my UC.

Okay, the fact that I was actually traveling and “free” at that time helped as well.

But I also noticed that my sleep got better, my skin showed less rashes from my psoriasis, and my hair and nails grew a lot better and stronger.

Also, my boyfriend drinks the same mixture every day and his skin just got a lot better too. He used to have a bit of acne – he doesn’t anymore.

The main ingredients of the Golden Milk

Here are the main ingredients that you can buy as powders to mix together to obtain this wonder-drink – see below for the quantities of each.

Turmeric is well-known for its strong anti-inflammatory properties. It’s a powerful aid for various autoimmune symptoms.

This green wonder contains lots of iron and chlorophyll. It’s amazing for stronger hair and nails which is something I struggled with as a side-effect from my medication. Another “added surprise” was when I got Psoriasis, also caused by medication. And I feel that, ever since I started drinking the Golden Milk, the rashes on my elbows got a lot better. Barley grass also reduces oxidative stress which is good for basically every autoimmune disease.

This is just very beneficial for your general health as rosehip contains more vitamin C than oranges, for example.

This ayurvedic shrub is amazing for its sleep-inducing properties. Because of my various health issues, I am a very anxious person. Always worrying, always fearing something else might be wrong with my body. I feel when I add some ashwaganda to the mixture, it really helps to calm down.

How to make this version of a Golden Milk?

For the amount of each ingredient, you will have to experiment a little bit. Each body works differently so there is always a bit of trying and testing involved.

Here’s what the basic Golden Milk recipe would look like:

Beware, though! With more than 1 gram of fiber per teaspoon, barley grass can have a slightly laxative effect on your tummy. You can always start with only half a teaspoon and adjust later, once your body gets used to the effect.

Some things to know before making this

Turmeric and rosehip are said to being absorbed by your body better when mixed to an oily substance. Some people use pepper-oil, I prefer CBD-oil as this has an additional effect on my sleep and anxiety. Plus: it’s also anti-inflammatory.

Some like to drink it hot or with plant-based milk. I tried both but I didn’t like it so I add orange juice instead. Every kind of liquid works well, it just depends on your taste-buds.

To get the mixture right, you should first add just a little bit of liquid, stir thoroughly until it becomes kind of a thick paste. Then fill up the glass (or cup) to your liking and stir again. That way, you avoid nasty clumps of powder.

Also: turmeric is a beautiful bright yellow that isn’t that beautiful anymore once it stains your white table for example. So pay attention to where you make your drink and beware of stains! Cynthia
A healthy drink to make every morning with all kinds of good effects. Get over the unusal taste and try to make it a habit and you will certainly feel the difference.
Print Recipe Pin Recipe
Prep Time 5 mins
Course Drinks
Cuisine Ayurveda
Servings 1 Previous PostHow Much Water Do You Really Need Each Day?
Next PostCoconut Paleo Date Bars Recipe 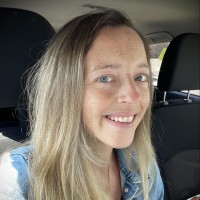 Cynthia is a strong-minded (some say stubborn) archaeologist from Belgium. Diagnosed with Ulcerative Colitis in 2011 and Lipoedema in 2017, she learned how to pursue her passion of traveling the world while battling various symptoms of autoimmune diseases. She just got back from a year-long trip around the world, visiting exotic places despite carrying UC-medication. On her (fairly new) blog, she writes about her experiences of visiting destinations with one eye on health issues in order to inspire fellow autoimmune sisters to hold on to their dreams of seeing the world. [READ ALL ARTICLES] Want to Detox? Read This First.