Hi! I’m Cynthia, a 32 year old archaeologist from Belgium. I currently live with my Austrian boyfriend in his home region and we were supposed to start a 1 year world-trip in April. I took a sabbatical in order to do this. As we had to stay home anyways, I took the time to start a travel blog to inspire others with chronic diseases to pursue their dreams of traveling.

I got diagnosed with Ulcerative Colitis in 2011. I’m on my 7th treatment now, an immunosuppressant drug called Ustekinumab (Stelara). The last one, Infliximab (Remicade) got me into remission after years of heavy symptoms. In 2017, I got diagnosed with Lipedema as well and got surgery performed on both legs. UC and Lipedema are both chronic diseases and apparently somehow related.

During my flares, I lost a lot of weight and I still can’t eat everything I want. But thanks to the treatments I got at one of the best hospitals in Europe, I don’t have to worry that much anymore. I used to be worried every time I put anything in my mouth that I would have to run to the next toilet. That was awful! But it also made me stronger, mentally. It was very difficult for me to accept the fact that I was so vulnerable at first, and to be told that I had to slow down my whole life. But I am a fighter, my whole family is. So I always battled to get what I wanted. I wanted a specific job: I did the entrance tests while having my worst flares ever. I had a doctor’s notice in case I needed to rush to the toilet during the test. And I got the job! It didn’t stop me from pursuing my other passion: traveling. But it did affect the way I plan everything. I have to do quite a bit of research before leaving. I can’t be as spontaneous as healthy people. But I manage to do it all. I got divorced after my leg surgeries and I feared a major flare-up. But that didn’t happen as I had already put so much work into accepting the diseases and living with them. I considered that a breakthrough!

I started to drink a mixture of turmeric, barley grass, rose-hip and cbd-oil every morning and I feel that my guts are thanking me for it! Of course, the drugs are working as well but the drink has also an energizing effect. Also, I replaced regular flour by spelt flour years ago and that has improved my gut flow dramatically. And my flare was when I started Yoga. That had some amazing effects as well! Oh, and I also got a car with seat heating!! That has been my lifesaver when I started the new job! I used to get my diarrhoea in the mornings and the pain afterwards was hell. But during the drive with the seat heating at a maximum, the pain had calmed down when I arrived at my work! Sounds weird but this really helped.

I still struggle, when meeting new people, to be honest about my diseases and the side effects of the treatment. I met Sebi two years ago, for example, and his family and friends have never seen me when having a bad flare-up. So they don’t quite understand what the deal is. Especially now, with Covid-19 at all, they don’t really accept it when I tell them that I prefer to keep my distances as I’m at risk. And I’m only starting now to slowly open up about my health struggles.

I’d say that “If you can dream it, you can do it” (wrongly cited as a Walt Disney quote) has always been my favorite 🙂
Another one pretty similar would be “A winner is a dreamer who never gives up” (by Nelson Mandela).

I have a dreamer’s personality. And I’m stubborn. I don’t give up easily, I fight for everything – including my dreams. 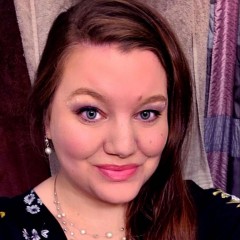 About Kristin Johnston | A little about me: I live in Grand Rapids, Michigan and I could not love this city more than I already do. I also love the state of Michigan and strive to advocate, promote, and recognize everything my Mitten state has to offer. I’m a digital marketer by day and by night - a writer - a digital junkie - and a freelancer. I strive to eat and drink locally whenever possible. I’m an avid reader. I’m married to the world’s greatest husband, and mom to two sweet boy kitties. Addicted to Instagram, iced chai lattes, and Tony's Chocolonely chocolate bars. I try to eat dairy free, mostly gluten-free, and moderately refined sugar free whenever possible.